Dreams. I don’t know where they are coming from. Well, that’s a lie really, so I will keep it for my self a bit longer. What I don’t know is what they are made of. They sipper in through the cracks of my reality, mostly at night, but also in the daytime at times when my mind wanders. They are like invisible smoke dancing in the shadows and I think that it was they Tarkovskij was speaking about in the deserted landscapes of Stalker: “What they call passion is not emotional energy, but the friction between their souls and the outside world”.

They hunt me down whether it’s tenderly with a softish smile or they take me over and make me think they are power enough to live for. Dreams are the dance of heaven and the source of both the beauty and pain of creation. But they need space around them so they can inspire themselves freely and grow with the dance, grow beyond our logical reach and take us with them on journeys we no longer create. That’s where we learn new things and our reality expands, slowly, slowly with every piece of the puzzle put together and we start to nod first insecurely, but then when we get taken my the magic of the puzzle – then we are nodding firmly, agreeing with life, agreeing with everything. Explications are no longer needed and we get a harder and harder time seeing if it’s we ourselves that are dreaming, or if we are already living in the dream.

But then comes when we wake up. That sometimes happens you know, that the glass house get crushed, falls together and the pieces spread out on the floor. We wake up, and instead of thinking that learning is always a upward going process of small victories put on each other in a big pile – instead it’s a up and down going rollercoaster.

And the funny thing is, depending on how we turn our head, up can be down and down can be up and every possible place in between. What we thought was magic at the mountaintops of our lives is everywhere. It’s just a matter on how we turn our head, and how we spin around with the ballet of perception. And sometimes, the only way to win is to loose.

A grin comes to my face. Because I know this, but still in the heat of winning and loosing, my mind is playing for the winning hand. But I guess… that’s only natural. It wouldn’t be a game worth playing at all if we didn’t argued it’s real. Like in a theatrical drama both the hero and the villain has to play their roles to their ends, otherwise they wouldn’t be able to create beauty on stage. In the green room though, they are once again best friends, and from a good and understanding audience, even though their feelings goes to the hero – the villain too, get warm applauds for good acting. 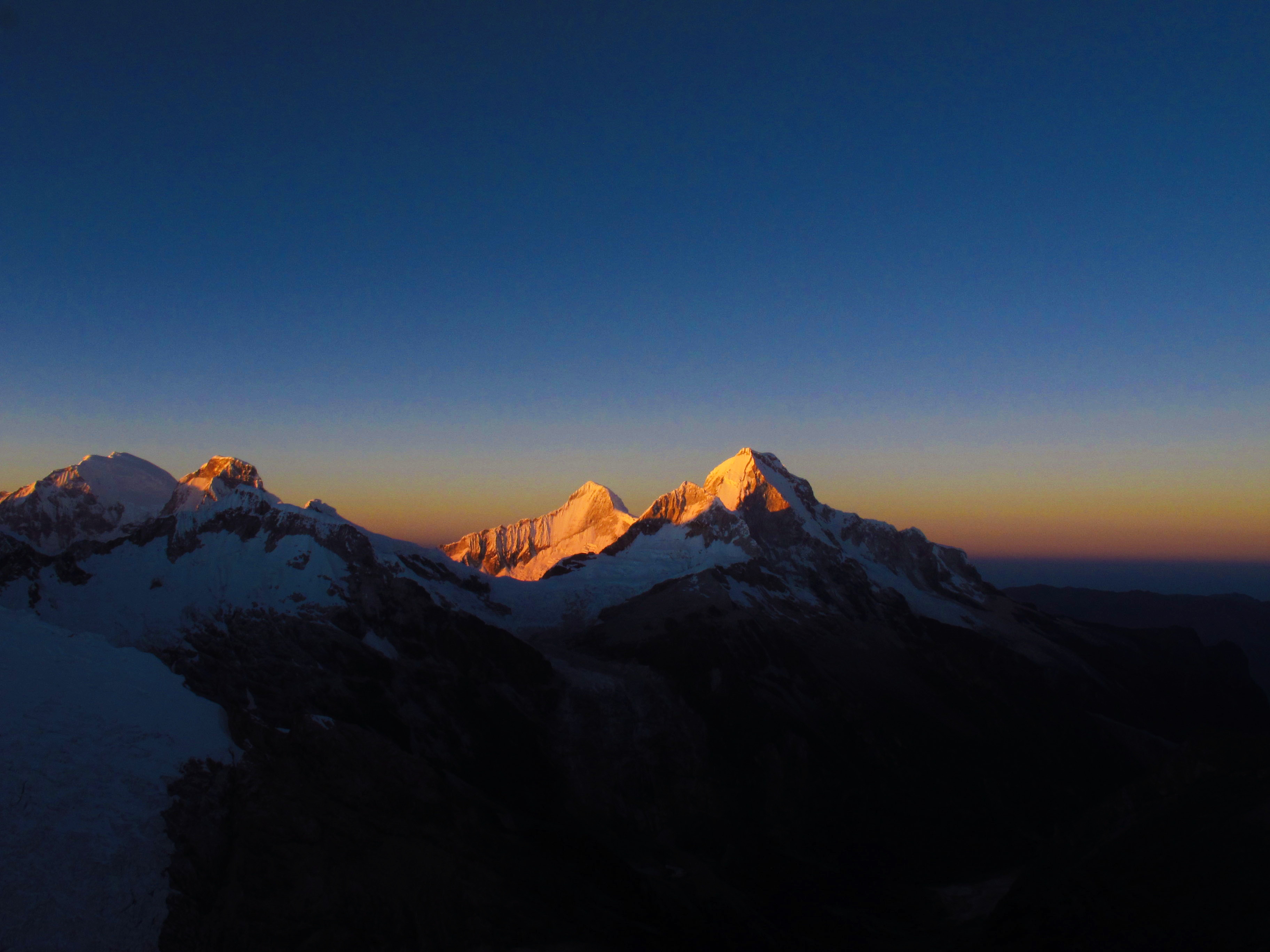 This was supposed to be a story about the mountains, and in many ways it is. It’s just that I don’t like to just scrape on the surface; I like to unwind the code.After three great but hard weeks in the Cordillera Blancas we threw in the white towel and ended the game just when we had laid the foundation and as going to ripe it’s fruits. We were done with the acclimatization, we had all the ground support set up, we were in shape, we had great objectives and good beta. It was the best snow year in a decade.

But there was this major thing that we had against us – a bad gut feeling.

It was there in the background at first, and my mind always start the inner dialogue throwing arguments up in to the air, have them fight amongst each other and then wait to see which one’s are still standing when the fight is over.

Most importantly, I start meditating on the feelings and keep on collecting arguments favoring both sides of the inner discussion. If I have a bad gut feeling in the mountains I turn around straight away, but if it’s during a project, then I become a collector of values.

Hard winds were totally wrecking the snow and storm winds from two different directions came in after our last acclimatization trip to Artosenraju. Freeride skiing was over, and now it was only a story about getting up and down things alive. Many, if not most, things media writes about from big mountain skiing covers this kind of skiing, and it sounds cool, look cool, but it’s actually kind of fake. The question society ask in general is always what was done – and never how it was done. It’s the wrong question to begin with and it goes in the wrong direction when the following story is built on a cracked foundation.

Bjarne and myself have a kind of unwritten rule, and it is to try to not do to many stupid things. And we had put ourselves in a complex situation. The glaciers we had to travel were really complex, and not at all, by any means even thinkable to do unroped. Especially when climbing. So we couldn’t really get to the lines and at the same time do filming from the other side of the valley. It was just not possible. It usually is, but we had misjudged the situation. We were one man short.

A lot of accidents were happening in the mountains. When we were there the first two weeks, three people died, where of one skier. Different mountains, different people, no one we knew. It didn’t have anything to do with us, right? We are doing this from the roots of fun, and young people dying when they are doing something they love can maybe be said to be romantic, but with too many friends parted for the same destiny it’s just sad. More things sounding responsible can be said, but for me it’s just sad, and it didn’t add to our motivation.

Moreover, most of the major lines in the Cordillera Blancas have loads of seracs. And we would need to move under them on every worthy objective we had found. Would the risk equal the rewards to go and ski some shitty but doable ski just to log a first descent or a beautiful line? Not really.

Still I was trying to make strategies, carve around these and many other arguments. Of course there are many more unsaid ones, there always are. But I’m not here to defend ourselves, just to put light on the processes marching by our though streams when we were in the mountains to learn.

I was still trying to negotiate my way around these arguments, and I found a great objective that was really worth checking out. The stars were aligned and my faith returned. We had a weather window before more hard winds were going to come in and this face had been sheltered from most of the past storms.

I told Bjarne my idea, and to time it right we would have to leave the next day. Bjarne just look down at the floor with an empty face. He had had enough.

I had also had enough, unconsciously, but I was trying to find ways to not loose. But with his answer, or missing answer, I knew straight away that we had not played our cards right and we were going to loose this game. One can say we were unlucky or the circumstances were not with us, but I like to see it like we were given a bad hand of cards. And we didn’t play bad, but we would have had to play outstandingly good to realize dreams on this adventure. But as I said before, it’s all about how we turn our heads and how we tune in our perception.

We got both an inner, as well as outer journey in the end. We got to spend time in the beautiful Peruvian mountains and we got to meet plenty of really beautiful people like Aldo, Marco and Elena at Galaxy expeditions, Chris and Isa at Andino and of course our Ecuadorian/Venezuelan friends, all of you, that made our time so truly amazing.

Bjarne and myself split up for our inner journeys. Bjarne went back to his natural elements at the coast, and I went to the Amazonian jungle for three weeks of meditation and reflection. For me it was a big dream come true to experience the deep jungle, living outside, most of the time alone and be close to both the life and the emptiness that is part of creation.

The answers and rewards usually come slowly to me after every time I have been able to totally disconnect from what would be called normal life. But for me it is as important to give space to emptiness as it is to eating, drinking, training, loving and sleeping – because it is emptiness that is implying all the other one’s, and not the other way around.

Now it’s time to be home and see what dreams that will come seeping out from the cracks of creation, spend time with family and friends and get ready for some summer (skiing).