Yesterday we went on a big mission on Forholttinden west of Lyngseidet in Lyngen. We drove semi-early from Tromsö in the morning and then approached Forholttinden from the east to be able to film it easily from the other side of the fjord. The target for the day was a beautiful couloir on the looker’s right side of the big mountain face. Morgan and myself was going for the adventure while Bjarne and Ale were filming from the road. We understood that the six kilometer approach along the water where to be though, but not that though; it took 2,5 hours on the way in and 3,5 hours on the way out and consisted of gravel with a few centimeters of snow on it. It’s the hardest approach I have had in Scandinavia and definitely the hardest I have done since South America. 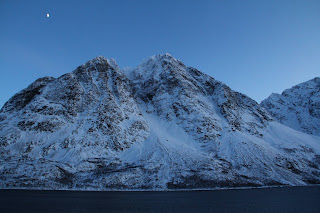 Forholttinden, the couloir we skied is the narrow line on the right (Photo: Bjarne Sahlén)
At around two o’clock we arrived at the start of the couloir and from there everything was pretty straightforward. First we climbed a couple of hundred meters in the couloir, then we climbed a thirty meter grade four ice pitch, another pitch of low angle ice and then continued another maybe four hundred meters of cruising terrain before we arrived at the very steep exit couloir. The end was only about two meter wide and really steep.
At the top we took a few minutes to rest and warm up in the sun and then we started the descent. Morgan gave me rope support for the first three meters so I would get a feel for the snow and then I took of down the beautiful couloir. About forty meters further down I ended up on a slab so I quickly took of my skis, down climbed two meters and then kept on skiing to a safe spot. Then Morgan followed me down and when he was safe over the slab I continued down in big turns all the way to the icefall half way down. The snow was totally awesome, easily the best I have skied for the whole season.
We managed to get over the ice with some down climbing and only one rappel and then we skied the second part in one go. The lower part had even better light snow and coming back to our traverse track it felt like the long approach was well worth the hard work. We finally arrived at Magic Mountain Lodge in Lyngseidet at midnight totally exhausted after a great day out.
We don’t know if this couloir is skied before, but it was however a great adventure with awesome skiing, a big feel to it and a couloir of high class wherever one would be in the world.
If you haven’t been there already, visit Bjarne’s video blog at endlessflow.posterous.com
As well as wonderful Magic Mountain Lodge on Facebook at here… 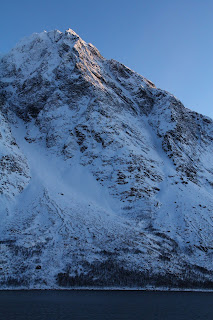 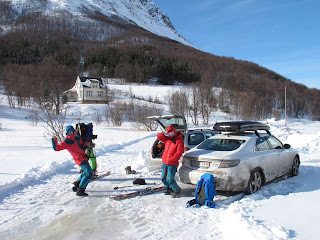 Morgan getting ready and Bjarne and Ale are enjoying the sun, knowing they don’t have to walk for hours on a rocky beach! 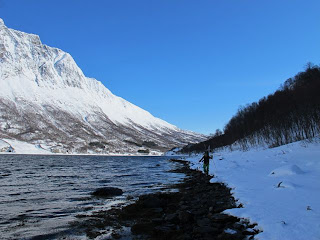 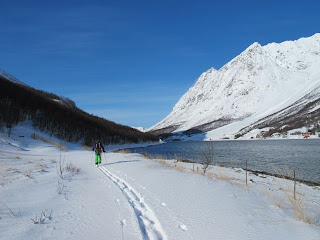 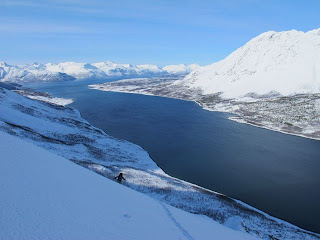 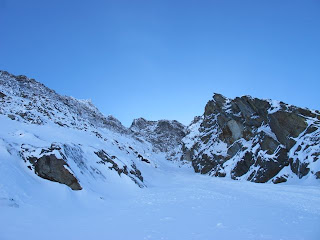 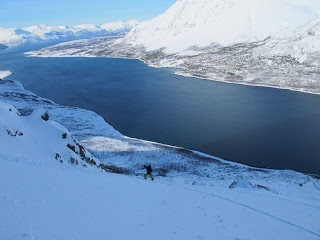 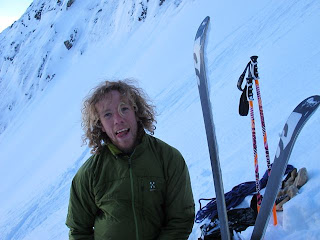 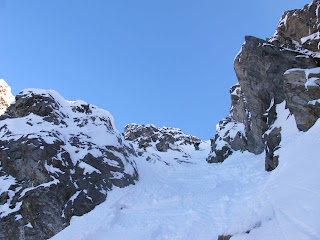 Morgan skiing from the top of the couloir 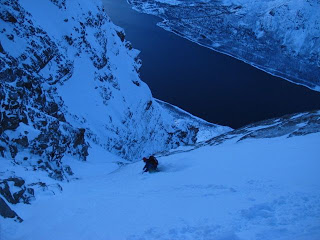 Morgan skiing from after the rappel 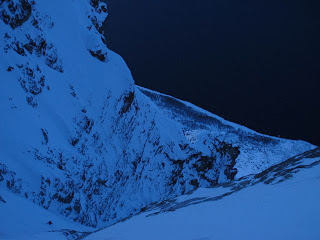 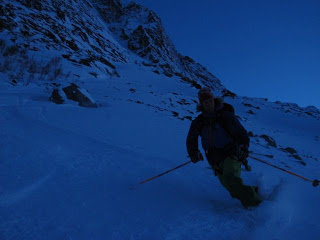 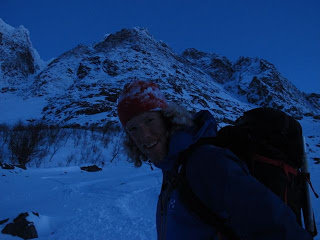