Ojos del Salado – Awarded the most difficult and bureaucratic sand pile in South America – to get to.

In the end we didn’t climb Ojos. We got to a point where we had to ask our selves if the play was worth the candle, and for us it just wasn’t. Yes, we could have tried to sort out the permits months in advance, but seriously, it’s just a pile of sand in the dessert and still it’s the most bureaucratic and expensive mountain in South America. If you like mountains, go somewhere else.
After Aconcagua we jumped on the bus to Santiago, Chile, and stayed around for three days to work on the permits. As we where a bit short on time they finally promised to give us a permit on short notice, so we continued 12 h north to Copiapo.
Finally there we learnt that the permits where not there yet and that we had to wait two days in town. We used the time to rest up after hours and hours of permit work and a long bus ride as well as trying to get ready for the expedition to come.
Two days later we learned from the tourist office that everything was ready and that we could go up to the mountain with the papers we had and they promised us a free passage.
Half a day later we arrived with our rental jeep at the police office in the dessert where they  received us in an extremely rude manner telling us that we should go home where we came from and that we had nothing to do in their mountains. Despite that we had the authorities in Santiago as well as the tourist office backing us up they wanted to show us their power and rejected every try to be diplomatic.
Chocked at their cold welcoming and tired from all the work that had led us this far we turned back to Copiapo. In the car we started reasoning what to do next. We could probably have waited around a few days more and returned with the right papers in hand, but our urge to climb another sandpile was just gone. There was not to be any great skiing or challenge on this mountain where you can drive up to 5200 m. We had chosen to see this last task as the final test of the trip and we acted there after – giving it a good try. But we didn’t want to force anything either and we where prepared to treat a defeat as a defeat. If there is no love in what we do, what is then the inner reason for doing it?
And in the end, if one live in ones head among thoughts and fables, on can say that we failed with our ambition to climb and ski the highest mountain in each of the Andes countries. But, if one looks at life as experiences and glimpses of reality heaped upon each other – it’s been hell of an adventure.
The long comment of the adventure will come shortly and the episodes from Mercedario and Aconcagua is in production.
In the mean time, check out Bjarne’s cool films on: endlessflow.posterous.com 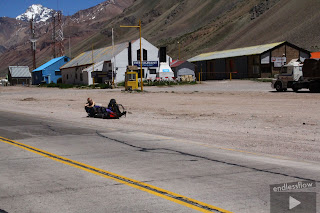 Myself waiting for the bus to Santiago… Photo: Bjarne Salén 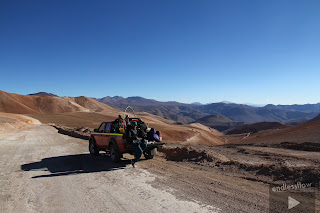 Cooking on our rental Jeep