This Wednesday I went up climbing a beautiful goulotte called Petite Viking with my friend Maxime Turgeon. We wanted to do a climb that’s fast and convenient that doesn’t attract too much people.
In the end we chose to go up the Argentière basin to do this classic ice and mixed climb on Brèche Est du Domino. On the way up we got to know that the bergschrund had collapsed making the access of the route impossible (according to the rumor and French climbing forums).
We thought this was good news hopefully keeping the otherwise frequently climbed route just to ourselves.
Arriving at the route we found ourselves alone with a giant bergschrund between the actual climb and us. We saw an easy crossing further to the left, but that would have led to lots of traversing to get back on route, and it doesn’t seem to be Max’s style to walk around stuff – so of we went straight over the serac.
Steep mixed unprotected ground led us trough a hole in the snowy overhang giving us by far the hardest pitch for the day. But with Max on the lead it never take to much time and we where soon back on easy terrain. Three very long pitches (running belays) led us the 500 m to the brèche with the last mixed ground as a highlight.
We rapped of the same way and where down in town in good time for me to start planning the next days adventure…
Thanks Max for a good day out! 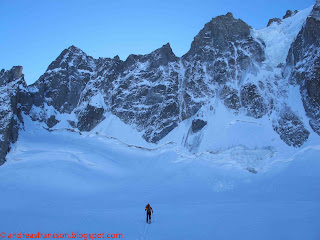 The approach, Pointe du Domino on the left 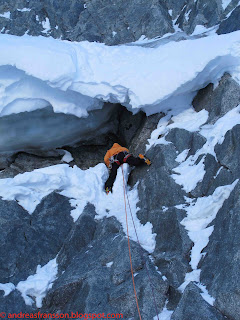 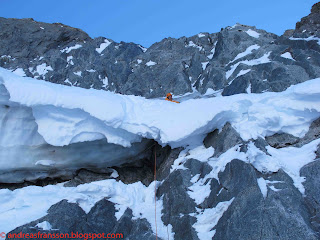 Max coming up trough the hole 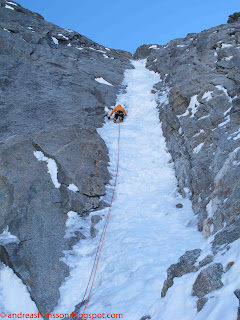 Max running up the mountian 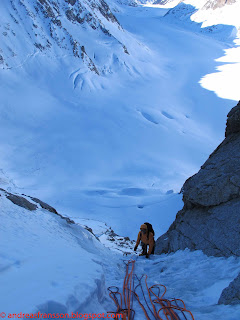 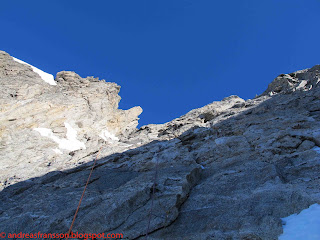 The mixed ground in the end 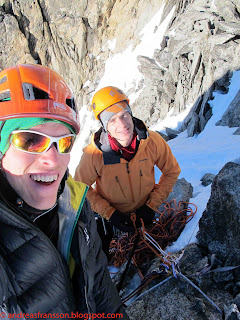 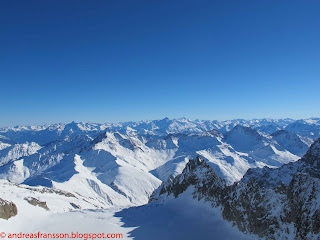 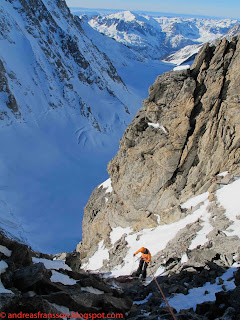