Happiness is only relative to our expectations. That’s why I like to enter every ski adventure with low expectations and an open mind. Last weekend JP Auclair sent me a message saying he got the week free for skiing and that we should catch up. Weather did not look like it would be on our side, but I was still keen to just go out with him and Bjarne, and just have some good days up there among the clouds. Expectations were just to spend time with friends, drink coffee, maybe have a snus (Swedish tobacco) and then see what we could get up to. Of course, I still packed my bag with the long rope, crampons and the other mountain stuff maybe needed. I don’t mind skiing with a heavy pack if it widens the options for fun and safer adventure.

On Monday morning the Midi didn’t seem like it could make up its mind when it was going to open and we had a guest with us, so waiting for too long for things to change wasn’t an option. We went towards the Grand Montets with the aim of skiing some powder on the top section of the mountain. It had been raining down in the valley on and off for a few days, so I guessed the conditions up high was going to be really good, if we would be able to see something.

But arriving to the Grand Montets parking we realized everyone else had thought the same thing as us and the parking as full of cars. Knowing everyone would be stuck in the bottleneck of the top bin we quickly talked it through and decided to go to Aiguille du Midi instead, even if it would be for just having a coffee up high and then download if the weather or conditions weren’t on our side.

When we got back to town and Aiguille du Midi we got the third bin of the day and shared it with only five other skiers. Days like these this lift isn’t for anyone, as the easiest route down the mountain is going down one of the biggest glaciers in Europe, and the other ways would be graded from far above double black diamond slopes to some of the harder extreme skiing slopes in the world.

At the top we took our time figuring out the wind, visibility and the snow as well as the flow of the other skiers. In Chamonix you have to handle everything a high mountain environment demands of you – plus the flow of other skiers that can make your life easier by putting in the right tracks and testing certain slopes, but also worst by doing crazy things above you in situations when you would prefer to be alone.

Half a meter of sticky powder lay on the upper slopes and obviously I wanted to get out on the north face: a 1200 meter big steep-ski averaging 45 degrees with route finding, exposure, rappels and everything else making Aiguille du Midi the burliest ski lift in the world. The approach is zero meters uphill, and if you get this face in perfect conditions it can give you one of the biggest ski experiences of your life. It is just a perfect place for steep skiing. Media mainly gives attention to exposure, levels of difficulty on the paper, legends, new contrived lines and side-stepping where people (myself included) are getting out of ordeals alive, but spending time in this business I switch over more and more on how we can ski the best skiing you can possibly fantasize and find new ways and techniques of doing so for a long time in to the future.

One of the ways, I think, is to have an open mind for turning around but still go out to the limit and see how things feel – and do it with people with a similar mind set. No pressure of success, no blinding concepts or prejudices, just an open mind ready to go forward if reasonable and if the gut feeling says yes and likewise completely open to turn around if the risks doesn’t equal the rewards.

The week before, after the last snowfall I stood there at the top of the north face for ten minutes taking in all the signs and feelings that came to me. I wanted to go, but everything wasn’t right. We turned around and skied a shitty ski down the other side, but still content that I had followed my gut feeling.

Now, I stood there again, for a long time and the scale started to weight in to the action direction. Still, traversing a 45-degree slope with half a meter of powder and no safe spots with over 1000m of exposure below you is Russian roulette. Most people just go for it, it’s the tradition – but it’s never the less Russian roulette.

To get past, or at least minimizing the lottery we roped up and put a couple of bomber ice screws all the way to the ridge and did the traverse on running belays to the start of the real skiing.

From here we skied down the Eugster couloir in unbelievable powder conditions, totally alone, with no stress, great ambiance, sharing a ski experience that in retrospect is up there with some of the best one’s I’ve ever had.

No pride, no macho mentality, no stress and you know what? No fear during the whole day.

For me, this is the real art of steep skiing now days. I have for sure been part of the community pushing the limits the young gunz way, with crazy lines, fast variations and doubtable security during my inner search for something secretly hidden in the future. Now, my personal game has shifted to the challenge of how we can enjoy the best skiing that the planet can offer, take away the stress and the competition and do it for as long as life will be with us. Accidents still happen, and steep skiing will always be out there on the thin line, but that’s also what makes this activity so special and rewarding.

We are out there, on borrowed ground enjoying something so rare and beautiful that it’s not part of normal life, it’s out there as one of those things we are dreaming of – searching for… and a few times every year we get to go out there and take down the dreams from the sky, touch them for some moments and bring back the motivation to keep on dreaming when we get home.

All of this finally comes out from patience and an open mind. If we would have come to Midi that morning expecting magic, then that would maybe have been impossible to achieve just like in meditation the fruits can never be taken by force or expectation, they will only be given to those already content, open minded and relaxed. 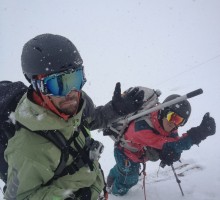 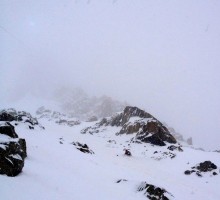 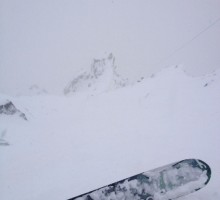 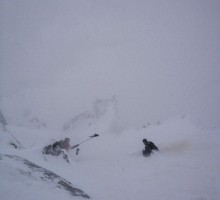 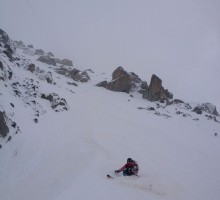 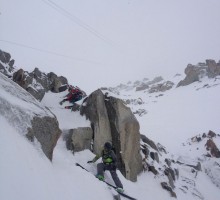 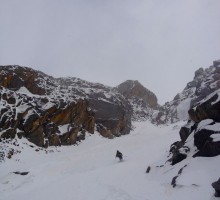 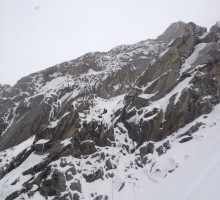 The next day, knowing the conditions on the face, we had decided to go and have a look on the legendary Frendo spur on the central part of the face. I only know two people who have skied this line since Boivin and Giacomini opened it decades ago and that’s Francois Regis-Thevenet and Alex Pittin’s rare repeat from last year (it probably got a handful of repeats, but not many in the recent years, I leave it like that, it’s not my job to make history research). Watch their video below:

I have skied the north face so many times that I have lost the count. If someone ask me I have said 30+ times, but I don’t really know. I used to lap Eugster, Mallory, Col de Plan and the West Couloir (only two times from the NF), but I had never skied the Frendo, that kind of is the last logical line down the face. So it was with great enthusiasm that I leaned into this day with JP and Bjarne.

At the top of the mountain we met UK skiers Ben Briggs and Tom Grant and we realized we had the same objective. Coming from having written the above the choice was clear, either we skied it together with a relaxed and “as safe as possible” mindset, or we would go and do something else. Ben and Tom being two of Britain’s best mountain skiers as well as all over great guys, we quickly agreed to share the experience and dropped in on the face as a team of five.

We used the rope to test the upper wind loaded slopes, did a rappel through the icefall, and then got hit by a proper snowstorm. We knew it was on its way, but no one thought it would come in that quick. But we put the upper part of the face behind us in reasonable time and reached the spur and relative safety before the upper face started sloughing too much. Well down on the spur, we could take our time, knowing it was all in our own hands. The wind was not that strong here either and we got to enjoy the skiing and the fact of just being in such an exceptional place.

From the spires at the end of the ridge we decided to rappel down straight from there instead of doing traversing rappels 50 meters further down. This adds about 60m of rappelling, but on bomber anchors following the weakness of the face and just makes the whole puzzle much more confortable. I feel like the steep skiing community has evolved so much in the last 3-4 years, that this route, especially with the falline anchors, deserve to become a modern classic. Now days it seems like the only challenge on the north face of Midi is to open it up and to be there alone, and I think that translate to the Frendo too with the ability of the skiers of today.

The lower slopes below the rappels served up with some really hard snow at the start that then got softer the lower down we came. Coming back to the mid station we luckily caught the last download for the day with the staff, as the storm and the foehn was closing down the lift.

Meeting with the different crews at the pavilion in the Chamonix Sud square I felt proud being a skier. Sitting there with beer, snus and cigarettes with some of the most passionate skiers on the planet, most of which had been skiing on the north face that day. Right then I felt like we skiers also have the same soul culture as I have found in the surfing and climbing world: People that, being there ignore all the negative of this world and totally dive in to that which might be indescribable but still gives us a reason to live on, to risk our life to a certain extent… something that makes us happy – Running to keep up with our passions like it was the last day of our lives.

Thanks Bjarne, JP, Ben and Tom for some great mountain experiences!
Also, read Ben’s blog post on the Frendo descent on his blog here. 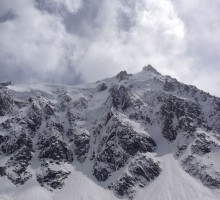 The Frendo spur, the biggest ridge at the center of the photo 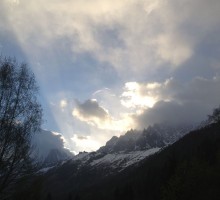 A magic morning before another day of mountain adventures 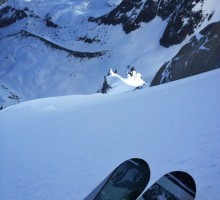 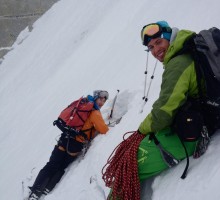 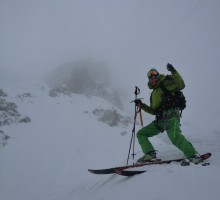 Ben on the lower section of the snow spur 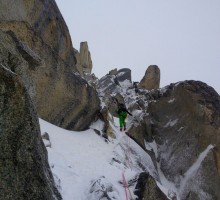 Ben rappelling down the rock 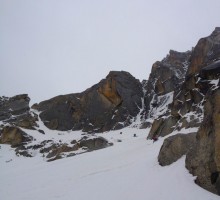 The crew on the lower slopes of the Frendo spur 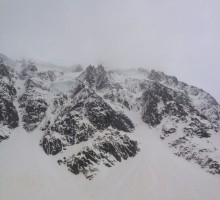 Giving some perspective in size, Bjarne is skiing the lower snowfield