The Necessity Of Cycles

When I was younger I used to try to follow my passion with 100% focus every day, all year around. On my biggest seasons, after I had quit school, I averaged around 300 to 340 ski days per year, travelling between the seasons in the Alps, the north of Sweden and Australia; ski bumming, training skiing skills, guiding heli skiing and ski touring as well as coaching clients and instructors. I love skiing, but back then I think it was more like an obsession.

I learnt a lot about myself, ski technique and the mountains, but I got to pay with hitting the wall, a hospital résumé longer than most I know and a body ageing way faster than normal.

Then I turned to the real mountains, and instead of focusing on ski technique I plunged in to the strategy, philosophy and adventures among snow, ice and rock. I started living for the next day’s venture, and for every day I learnt something new and also stepped the level up step by step. I was on the same path as before, and my body, mind, injuries and accident followed in the same way as before.

Slovenian alpinist legend Tomo Cesen once said that that; after every great challenge he has done he always pause, draw back and rest his mind for some time before he takes on a new task. This is as to not get speed blinded by high difficulties, loose the fear and respect that comes with a worthy challenge and to not get carried away by success. When you have accomplished a task, you normally want more, you get confident, probably remember what was hard as easy and then risk pushing it too far.

In steep skiing (and mountain activity in general) it’s alarmingly easy to get used to, and loose the respect for, exposure (both for objective as well as subjective). If you are skiing the steeps every day you will sooner than later start feeling that extreme slopes are not much harder than walking on a sidewalk. And it might be percieved to be so, but then again, my hardest beating I have got this year was taking a fall on a sidewalk in Stockholm on an ice patch covered by a bit of fresh snow.

We need to be confident to be able to perform according to our potential, but we also need respect and fear as our companions to stay around enjoying the mountains in the years to come.

Cycles help us keeping the sacred balance in between these opposites that might be key to survive the mountain environment. They of course also help us keep the balance between rest and training and in the keeping of our egos in place.

But also, on the big whole the game of cycles serves us up with the contrasts that are defining life. Without darkness we wouldn’t see light, without a pause from what we love we wouldn’t acknowledge how much we love the things we do.

For me, allowing, accepting and recognizing; this dance of doing and not doing is one of the most important thing in a mountain life, if not in life in general. 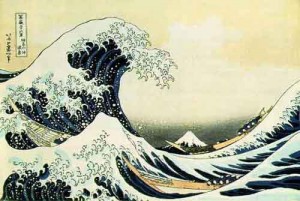 The wave of life