We have travelled to the other side of the world to do create an adventure.
I talked earlier about the analogy of a good adventure and a high jump competition where, if you aim high, there is a big risk you walk away with nothing. On this trip we have aimed high in our goals and we have failed in most of our objectives – except, luckily, the biggest one on the Whillans ramp over at Poincenot. 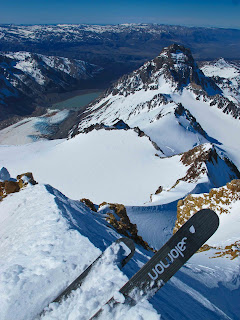 Skiing on the East Ridge of Cerro Grande, Cerro Torre Massif, Argentina
On our last little excursion Sunday, Monday and Tuesday, we walked in once again to the Torre valley to try to ski the most beautiful line we have spotted there – the north face of Cerro Grande.
The walk in took us nine long hours with heavy packs. Then we pitched our tents on the glacier, ate some, slept some, ate some more and then left for the mountain at 4:30 AM.
Refrozen breakable crust awaited us in the dark on the steep slopes on the side of the highly crevassed glacier. It was impossible to walk with the skins, it was way too slippery, and instead we had to boot pack 1000 meters in the boot deep crust.
At nine something we made it up to the plateau under the north face of Cerro Grande. We got welcomed by a really beautiful face in great conditions, but after my mind game at the Whillans ramp a couple of days earlier I got a bit intimidated by the seemingly really steep face. I used to think that anything with snow is easily skiable, but after our last adventure I wasn’t that sure anymore.
When coming closer though, I could see that this face was like any other – just a steep and easily skiable ski run – and all my fears for steepness disappeared.
Another thing worried me though, and that was the warmth. It was really warm this early, and almost no wind. Warmth in the mountains when you are there to ski, is usually not a good sign, at least not when you have snow covered rock faces and ice mushrooms above you.
Bjarne followed me up the face to the bergschrund, but during our half hour climb, ice and rocks started to fall down the mountain with higher and higher intensity.
I wanted to ski this line so badly, but we had no other choice than to turn around.
In the mountains you have to have a great up-craving to get anywhere, but you also have to turn around when your gut feeling or your intellect tells you it’s a no-go.
The friction that the craving to fulfill an idea and real mountain sense creates – it´s one of the most painful feelings I know of in the mountains. When you are there it hurts, but when you come home you’re proud you didn’t “fail upwards”.
Usually it goes well even though you know you should have turned around, but inside of you, you know you were playing the game of fluke.
I have learnt that you have to nourish both sides of the coin: both the “up-craving” and the will to run away, because it’s the balanced dance these two are dancing that creates the power for accomplishment and the will to persevere.
At the bottom of the mountain we sat down and had lunch. We had walked a long way to get here and we were not able to live this beautiful experience that was waiting for us.
After this quick stop we walked around to the east side and Bjarne, once again followed me over the bergschrund and then skied over to a spot on the plateau for filming. I climbed the East Ridge as high as I found snow, about 50 vertical meters under the summit, and then skied down this line. I found some really technical passages, but nothing that raised the pulse, and in the end I had a great ski down one of the most beautiful mountains in the massif.
The next day was even warmer and we walked back to town. In the end we got 16 hours of walking there and back for about 2200 vertical meters of skiing (Bjarne about 1500m).
I’m really impressed by the mountains here. They are definitely the wildest low mountains I have ever encountered. It doesn’t feel like it’s made for steep skiing as it’s so rough and wild, but there are definitely lines here for the coming generations to enjoy!
The last two days we have just rested in town and been exploring the bouldering potential. Tomorrow is another ski day, but this time close to the road.
The lack of photos here lately is only due to extremely slow Internet. We got plenty of photos, but if would take days to upload. 🙂
Tweet this post
Email this post
Share on Facebook
0
4789 Views