Yesterday the Sahlén brothers and myself went for another try of Jiehkkevarri, the highest mountain in Lyngen.
Exhausted from the last weeks big days and not extremely motivated for another early start and climb of Holmbuktstind we took of early morning. Weather being perfect with not a cloud on the sky we easily cruised to the top of Jiehkkevarri in 4,5 hours. 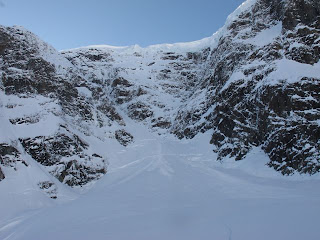 The east couloir on Jiehkkevarri
From there we skied down southeast to get have a look at our objectives: the South face or the east couloir of the mountain. We took an hour to examining the south face (also known as the Arctic Brenva Face) from up close, but we didn’t feel like the risk equaled the rewards so we walked back up again and aimed for the east couloir instead, a beautiful line that doesn’t seem to have had been skied in its entirety before.
It turned out to be a beautiful preserved gem and offered us the best skiing we had for the whole trip! It’s an about 800 vertical meter couloir with a big mountain ambiance totally hidden away from the normally busy (for Lyngen standards) summit. We found the couloir with thirty centimeters of cold powder snow and where totally amazed on how good the skiing was!
This adventure should become a future classic for the new generation of mountain skiers. You get to summit the highest mountain on in Lyngen, traverse the whole “island” and ski a fairly easy but grand couloir in big mountain ambiance with seracs looming high above your head (not too bad though, its only for the lower part), then its only about an hour of walking and pushing to get back to the shores on the east side (where you hopefully have parked a car in advance).
If the couloir doesn’t have a name already, I suggest Linus’ couloir for the passionate skier Linus Johansson who have already skied part of the line and who pointed it out for us! I know people used to climb up this as a climbing route a long time ago, but I can’t really see how this could be considered climbing by modern standards… But whatever name this line will have in the future its still an itinerary that deserve to be a classic in Lyngen.
With this one bagged we start to feel like we are done with the big days in Lyngen for this time. Now its time for some rest, some good powder turns and soon we are of to Cham! 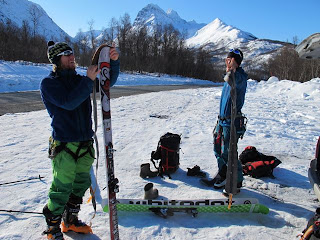 A tired crew getting ready in the morning 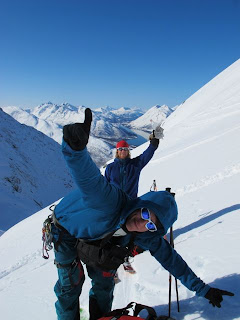 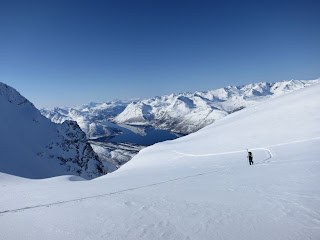 Bjarne with the fjord in the backdrop (Photo: Morgan Sahlén) 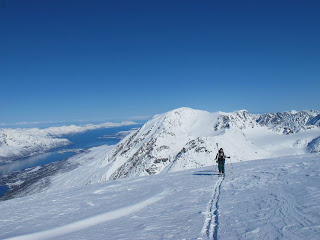 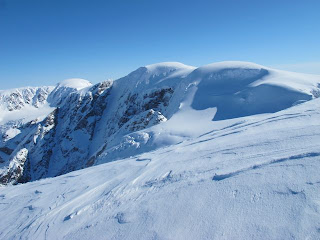 Our goal, the summit of Jiehkkevarri in the middle 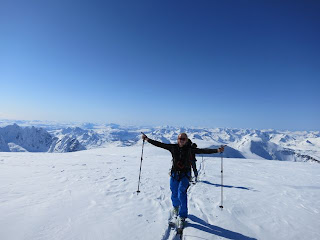 Myself on the flat summit (Photo: Morgan Sahlén) 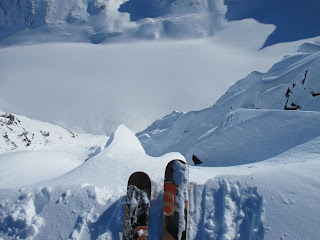 Looking down the south face 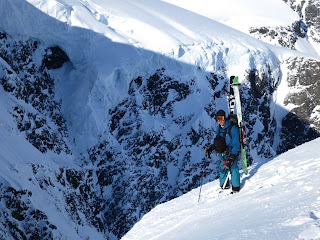 Bjarne looking in to the east couloir (Photo: Morgan Sahlén) 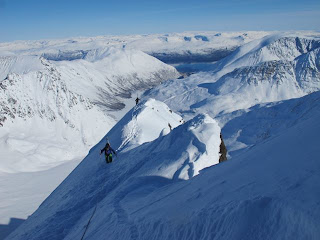 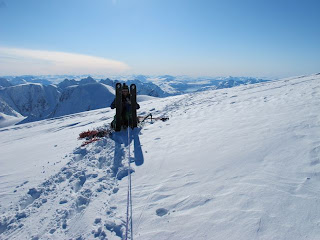 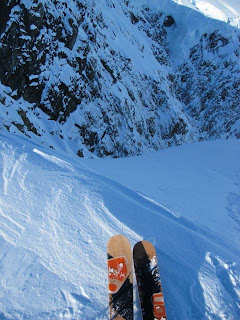 Looking in to the east couloir 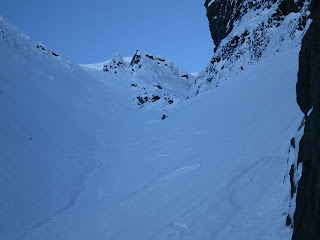 On of the brothers in action 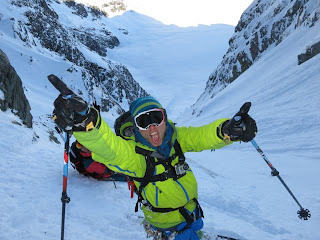 Myself, super happy with the skiing! (Photo: Morgan Sahlén) 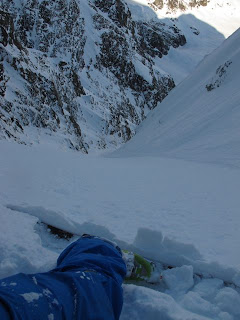 About one third down the couloir 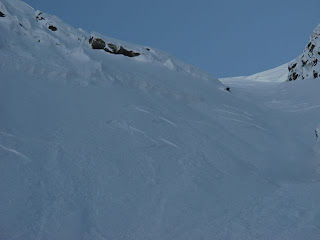 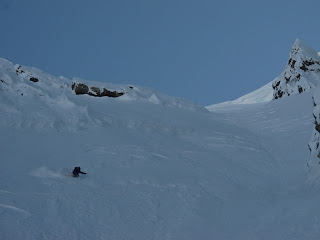 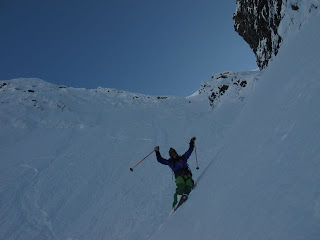 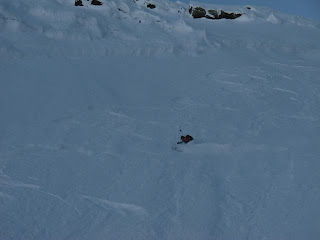 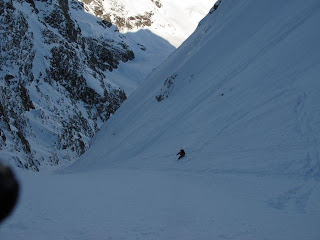 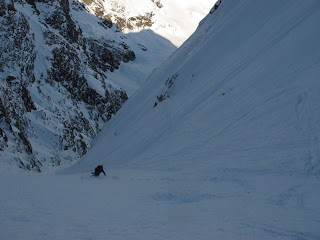 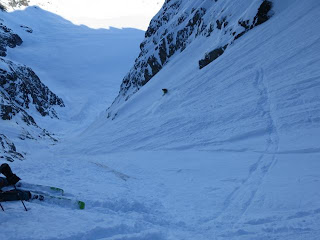 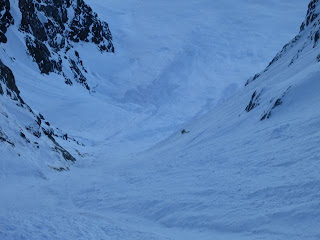 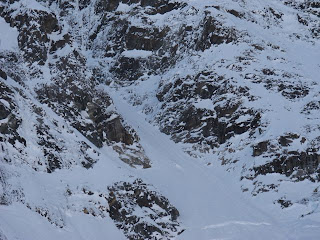 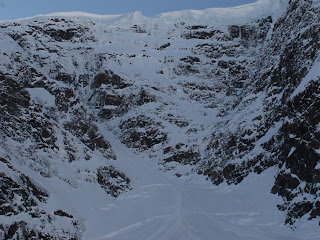 Its a big face 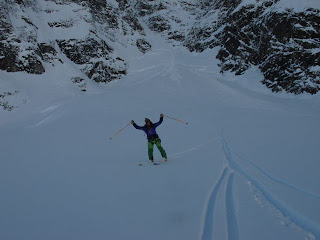 Morgan coming down on the glacier 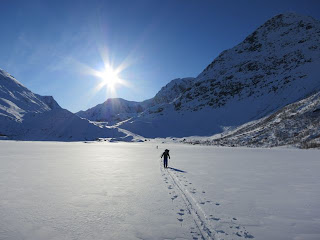 And at the end, walking back… Sliding, pushing and walking it took a little bit more than an hour to get back to the car from the couloir. Its 9 km and we took it easy… (Photo: Morgan Sahlén) 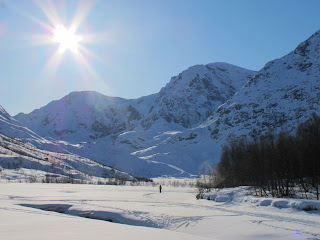