The ventilation system is running wavelike in the roof. You can hear the air going through the shack in the middle of the building but we can’t look out. We don’t have a window. The walls where once white, but are now brownish and there is a distinct smell of smoke that fade away after some time in the room.
There is no way of running away from the heat and the humidity in this place. The panic might come creeping, but there is really no way out, so just go with it! Feeling the heat and the pulsating beats of air from the vent system gives me a desire to meditate and a friendly  helping hand in to reality.
It feels like we have sailed in to a pirate port in a time long ago and are now enjoying the ups of civilization life after months at sea. In reality we have just arrived to Ecuador’s financial capital and biggest city; Guayaquil. After a five hour bus ride from Riobamba on winding roads from around 3000 meter above sea level, up to over 4000 and then down all the way to the Pacific ocean in a wild chicken race kind of lap against tractors, trucks and kids with death as the only viewable end for the ones that loose.
Still, this feels like a place lost in time and a no place to be for anyone resembling a gringo. The white folks are hiding in fear of reality at the posh hotels and the streets are pulsating with life so naturally human that anyone in fear of dirt will instantly run away. The real life takes it turns out on the streets and anything that goes is a good idea in the game of surviving. Old ladies selling ice cream out of black plastic bags, young boys running around with Coca Cola bottles selling coke by the glace and many others hunkering up on the side of the streets selling whatever they have found worthy looking at.
We are wandering the town in search of the adventure. Everyone we ask where to go tells us Hotel Continental is the only safe place for us gringos. Over there they have 24/7 security and we will not have to worry. After a wonderful chinese dinner we loom after some colombians to check Continental out.
We order two beers and sit down to watch some baseball. After half an hour we are bored out of the sterility of the hotel and wander out. On the way we find out that those two beers where more expensive than the dinner we just had.
It is said that allergy doesn’t exist in farms where the children constantly get in contact with the bacterias from the animals and the dirt. Some kind of connection with that thought hit me when I walked out from the hotel – the only place in town where gringos feel safe.
In the lonely planet book its said that if you are out in town after dark you should take a cab even if only going one block. All the information we get seems to be bathing in fear. Anyways, we left everything worth stealing in our bunker of a hotel.
We head towards the darkest alley we can find in search of finally getting robbed. No guns or knifes anywhere to be seen. Instead we get searched up by two climbers from Mendoza. They liked to go down to the ocean where we a couple of hours before found that pirate ship that came to symbolize this town.
Bjarnes stomack says no, so we run for the hotel. A night in fantasy and fables is coming to an end. I’m mostly happy for not paying the bus driver the three extra dollars he tried to scam us on when we arrived. And sad for the black taxi dude who got caught by the police when driving us to the the terminal terrestre. He paid 25 cents to drive us to the bus terminal from town – that doesn’t feel fair.
Shitheads:
Andreas: 5
Bjarne: 3
Sleepins:
Andreas: 1
Bjarne: 2 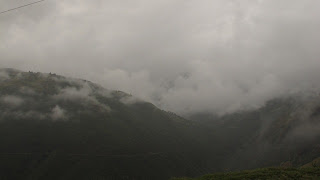 The view from the bus 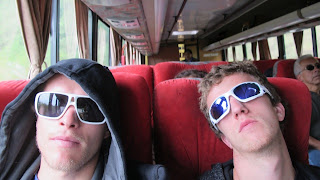 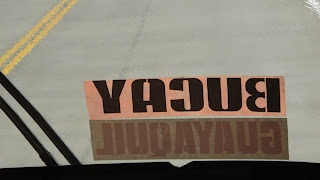 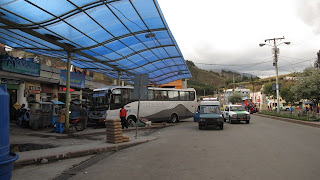 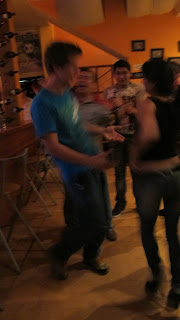 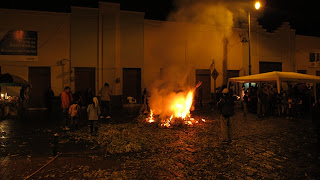