Writing this I’m sitting on a plane in between New York and Seattle on my way to Alaska and are looking back at two really intense days in Chamonix. I got in to town on Wednesday late afternoon and spent my first hours in town meeting up with friends and sorting out equipment for the Alaska trip. On Thursday morning I had set up with Constantine Papanicolaou (CP), the filmer working with the upcoming Seth Morrison movie, for an interview and we went up to the mid station on Aiguille du Midi to get some good ambiance.

I had timed my days in Chamonix perfectly and a rainstorm had just hit town plastering the mountains higher up with perfect snow for steep skiing. I was figuring out that it would be good skiing on the north face of Midi, but being new in town and not knowing the conditions by heart, I wanted to wait one day for the snow to settle. 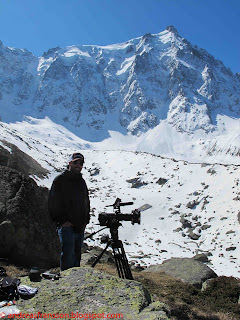 CP with his big camera and Aiguille du Midi in the background
But sitting down in the sun doing the interview I spotted some skiers slowly skiing down the Mallory. The snow looked super good so I directly decided to have a quick ski in the afternoon. Knowing the culture in town I where guessing it was going to be crowded on the face the next day. I called my friend and filmer Bjarne Sahlén and went home to get my skis.
The Mallory Porter on Aiguille du Midi 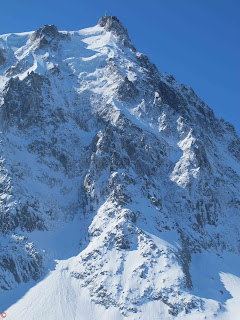 The north face of Aiguille du Midi. Mallory-Porter goes down in the centre of the photo

We went up with the 13:30 bin and where at the top at around 14:00. I started skiing straight away and where able to ski the first half of the run in almost one go – I had to wait for Bjarne once when he changed angle and for him to get in the lift, to film me as he was passing by on his way down. The snow was excellent and it felt great being back in Chamonix again and straight away be able to get some got skiing in.

After the intersection between Eugster and Mallory the small right trending couloir was not very well filled in. The party that skied it in the morning had rappelled the whole thing but I gave it a try and managed to ski it till just two meters from the left slanting thin traverse where one have to walk down on a rock slab and then do a small (really exposed) jump to get by. Three years ago I skied it in similar conditions in the autumn, but I guess I’m getting old and smart(er) – so I used the rope for those few meters.
Next followed the second big snowfield that felt more like freeriding than extreme skiing before I ended up on the second crux where I once again used the rope for a few meters, then skied down the third snowfield and then put up the obligatory rappel.
After the rappel the skiing get much less exposed and I calmly skied down a narrow arête in to the final couloir and then out on the big snowfields below the face. 5 minutes later I where back with Bjarne at the lift station looking back up the mountains.
Down in town we met up with photographer Tero Repo for a light après ski with ice cream and coke. With the conditions being that good we both agreed that it was time to get one of the most mythical faces done before the camera. Skiing the north face of Aiguille du plan the next day became a fact. But the day was not over just yet, I still had one more interview to do, this time with Trey Cook on Chamonix insider and then a lovely dinner with the best friends in town at Casa Velerio 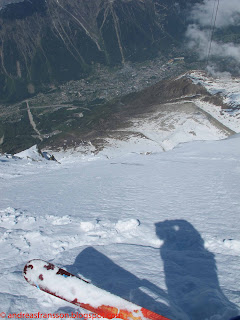 On the top of the first big snowfield 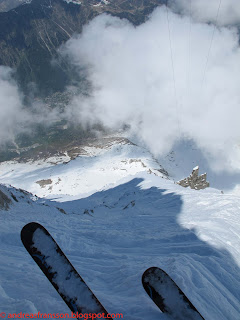 And then on the second 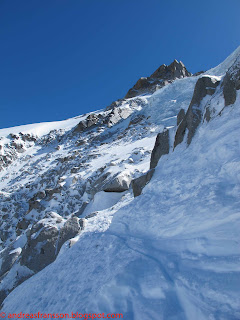 Looking back at the exposed traverse after the small couloir 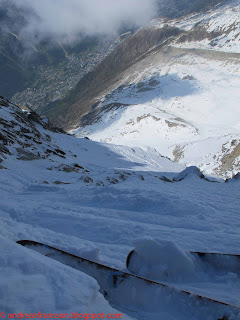 Above the second crux 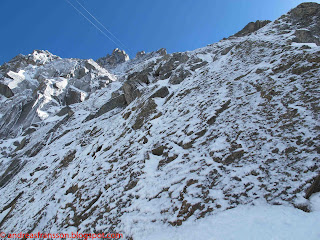 Looking up after the obligatory rappel 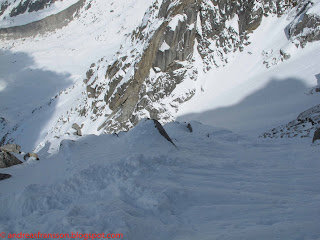 And then down at the skiing 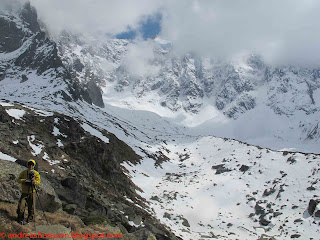 Bjarne Sahlén was filming the adventure 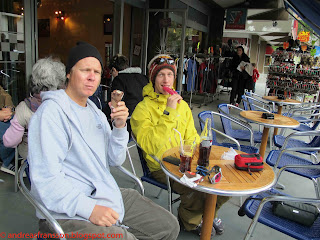 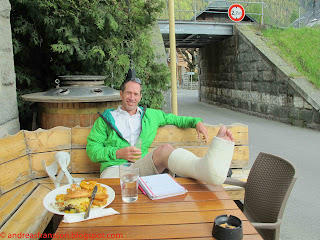 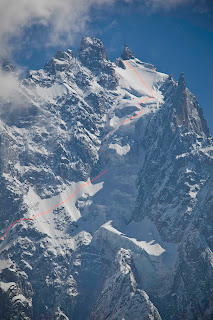 The first half of the north face of Aiguille du Plan, we skied the red line on the photo, except that we rappelled on the lookers right side of the big serac instead of on the left. (Photo: Tero Repo)

The next day I met up at Midi at 8 o’clock with filmers Guido Perrini and Bjarne Sahlen, photographer Tero Repo and snowboarder Xavier de le Rue for our project of getting some good material from the face.

The north face of Aiguille du Plan is not really a ski, its more of a mind game where problem solving and keeping ones head cold is much more important than the actual skiing. I already skied the face two years ago with Tobias Granath and then it probably was the first decent in 15 years, but this year it already had two successful descents. Last time I told myself I where not going to do the face again, and I guess I repeat that quote again after this repetition. You will understand why…
I would say this is the most beautiful skiable face seen from the Chamonix valley. It thrones up in between huge rock walls in the middle of the Chamonix Needles and is totally broken up by a big maze of seracs. The run finishes with a dead end above 300 meters of either active seracs or a compact slab. As a ski descent it is a rapp fest, but its also one of the biggest experiences one can get in the Chamonix range.
We accessed Aiguille du Plan from Aiguille du Midi via the Midi-Plan traverse in about two hours. A helicopter was booked for the photo/film crew for 12 o’clock so we knew we where in no hurry. Arriving at the start of the ski run, just bellow the top pinnacle we realised how good the snow where. Perfect light powder snow awaited us, but we still had to wait almost an hour in the cold before the heli would come. To warm our heads up, we got to witness a huge serac fall on the north face of Midi, reminding us in what kind of terrain we where going to enter.
Soon enough the boys arrived and the game was on. We skied the first 250 vertical meters fast and smoothly, but arriving just above the biggest seracs the snow got super hollow and slabby, so we had to start making good use of the rope as Xavier belayed me over the traverse to set up the first rappel. Then we rapped over the seracs, and arriving bellow them the snow was not any better so we kept on using the rope and placements to cut the slope for half the right slanting traverse as well. The sun had transformed the snow on the skiers right hand side, so from there we where fine to ski again. The hidden couloir awaited us with great snow, but we had to climb over some rocks in between snow patches to get down it and after this we skied down the last big snowfield and set up a rappel at the top of the last seracs.
From here one has two choices; either rap fast straight down the seracs or trend skiers right down the compact slabs. The first alternative means much higher objective danger the second means a real challenge in finding good enough cracks to build secure anchors. We choose the later alternative and trended right, finding some of my old anchors from before but had to mostly redo the procedure. I blessed my last knife blades and all the stoppers I had in the middle sizes. On the last rappel we where almost free hanging on two small nuts and a knifeblade, a situation not at all unusual when climbing, but a different story with ski and snowboard gear on a ski mission. Just when Xavier commented on the situation the serac fell on the easiest way down under the hanging glacier (the alternative one that I where talking about before) making even this awkward situation feel like paradise. Getting back down on solid ground I packed the ropes and let Xavier go first as we didn’t know when the last lift down would go and he is a bit slower on a board on traverses.
We ended up getting down in good time for the lift and celebrated with a Coke and a Twix at the little café on the terrace.
Taking my boots of at the perking lot I discovered something that explained the bad feeling I had on the top. Just before I took of I double-checked my boots and bindings like always, but this time there was a small gap under the left heel allowing me to lift the boot up and down 1 cm in the binding. I thought the bind was just getting old or something, but taking the boots of I realised the boot was broken and the metal piece on the heel was gone. Skiing was fine without it as long as I stayed on the middle of my foot, but I did not want to go to Alaska with a broken boot and my flight was in the morning the day after. So while the others enjoyed beer at Elevation I run of to Kai at Chamonix Freeride Centre and begged him to sort the boot out. I would have no time to get a new boot sorted for my feet before the next day so I was lucky to have one of the best boot fitters there is to get them back ski condition. Damn that was a hectic day – Then over for dinner, doing the last phone calls, do the packing and then of to bed for a few hours of sleep before the flight in the morning. 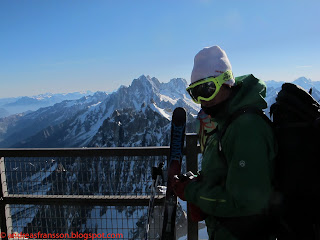 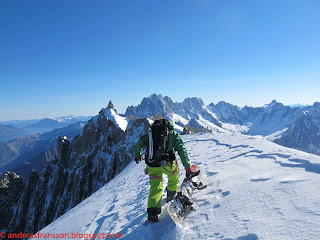 Xavier walking over to the first pitch of Grand Envers 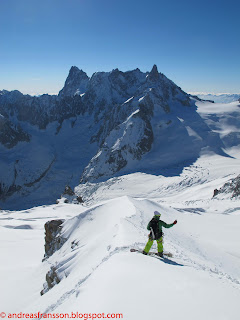 Xav talking to his Go Pro 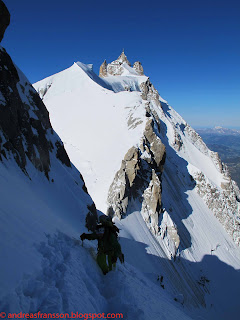 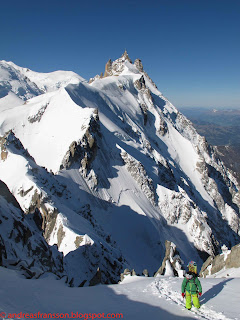 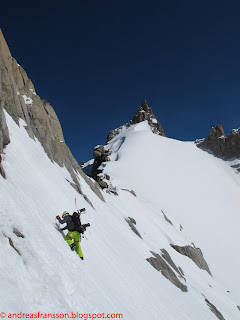 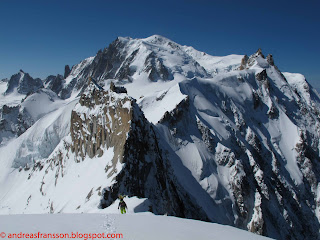 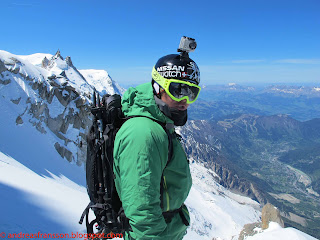 Xavier de le Rue on the top before dropping in 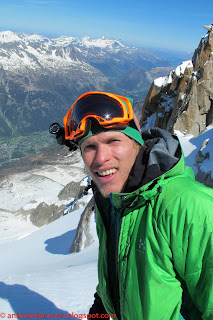 Myself on the top 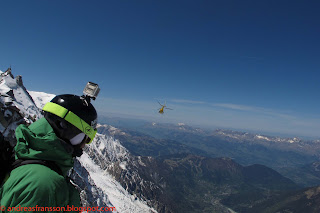 Xav with the heli in the background 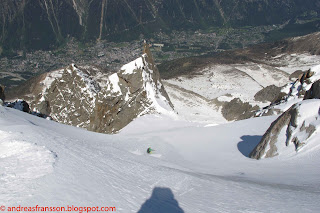 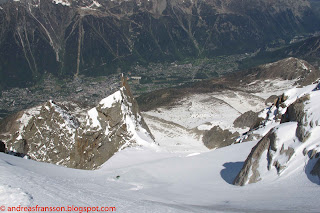 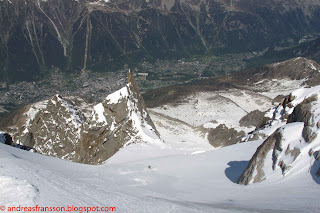 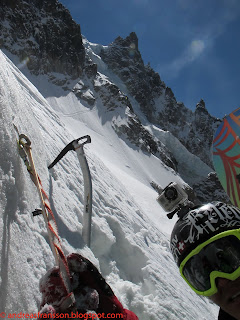 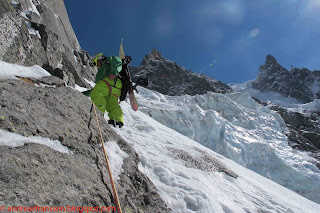 Getting on to the slabs 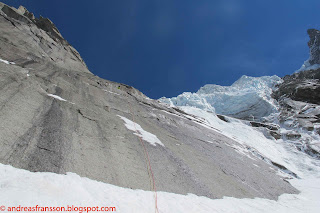 Looking up at Xavier and the last rappel 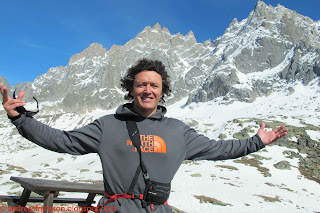 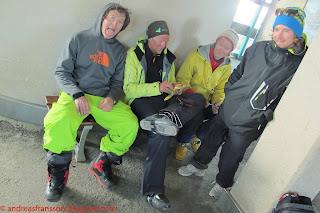 Thanks Chamonix for a two great days and thanks Max and Zoe for the stay, Bjarne, Xavier, Tero, Guido, Trey and CP for the missioning!

Now it’s Alaska time! Don’t wait for any updates in the next month, ill be beck in Sweden the 14th of June with a rapport!
All the best / a
In the meantime Check these spots out:
Bjarne Sahlén’s video blog – endlessflow.posterous.com
Xavier De le Rue’s video blog – www.timelinemissions.com
Trey Cook’s blog – chamonixinsider.com
Tero Repo – www.terorepo.com
Guido Perrini – www.guidoperrini.com
CP – www.directorcp.com
Seth Morrison’s filmproject; The Ordinary skier – www.sethmorrison.com
And of course www.chamonixfreeridecentre.com, the premiere boot fitters in the Chamonix valley!
Tweet this post
Email this post
Share on Facebook
1